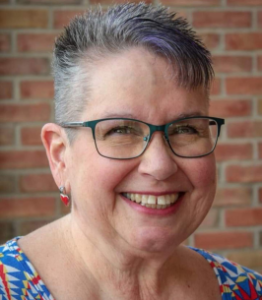 Please join us in celebrating Amy’s life with food, music and friends at one of her favorite places, Center Stage Theatre.

Wear something pink or your best flamingo attire in honor of Amy.

Lunch/Time of Remembering to follow in the Colt Center

Amy Jo Lynch went home to be with her Lord & Savior on September 4, 2022, after a courageous 2-year battle with cancer. She left behind her daughter & best friend, Anna Jocelyn Lynch (seventh pregnancy, only surviving child) along with her mother, Shirley Ann (Spencer) Lynch and her brothers James J. Lynch, Jr., Michael S. Lynch, and Sean C. Lynch. She joins her father, James J. Lynch Sr., and her unborn children in heaven.

Amy was born in Bloomington, Indiana and graduated from East Kentwood High School (Kentwood, MI) and Western Michigan University (Kalamazoo, MI). Amy lived in Florida and Arizona but later settled in the Kalamazoo area where she has lived since 1987. Amy was a teacher and in later years was a nanny for several families. Even while taking chemo, she continued to work at West Michigan Pasta & Provisions. She was active in both the Kalamazoo Civic Theatre and Center Stage Theatre and often volunteered at the Kalamazoo Public Library Friends Bookstore as a life-long, avid reader. Amy was also a proud “Mimi” to several guinea pigs over the years. The latest two, Graham and Gracin, will be keeping Anna company.

Amy was the life of the party everywhere she went zipping around in her little red car. She loved flamingoes and had more flamingo clothing and other pink items than you can imagine! Although short of stature, there was no missing Amy! The world won’t be the same without her presence.

A memorial service will be announced at a later date. In lieu of flowers donations can be made to Center Stage Theatre.